In order to achieve the climate goals and to get ahead in the fight against climate change, it must be a clear target to expand the sources for sustainable energy. As one of these sources, green hydrogen plants, underground storages, pipelines and infrastructure will play an important role in working against global warming. Over 30 countries have released hydrogen roadmaps and more than 220 hydrogen projects exists around the globe[1]. The German Government has fairly recently adopted its Hydrogen strategy (“Die Nationale Wasserstoffstrategie”, June 2020). The main goals of these strategies include taking on global responsibilities and making hydrogen competitive in the national and international market. The German Government intends to focus primarily on green hydrogen so it can be established as an alternative energy source. Green hydrogen is produced by electrolysis of water, only with energy derived from renewable energy sources, such as solar or wind farms.[2] The European Hydrogen Initiative is set to create a coherent framework for the future production, transport, use and continued use of hydrogen.

Since this concept is relatively new, there are bound to be several legal aspects that have not been dealt with yet, or that are not as well-known yet. In principle, the legal issues around the green hydrogen plants (electrolysers) and infrastructure expand along the full circle of engineering, permitting, construction, commissioning, and supply chains of green hydrogen and energy. The involved parties include financial institutions, customers, contractors, subcontractors, plant operators, municipalities, public authorities and other stakeholders. The principle of production, st 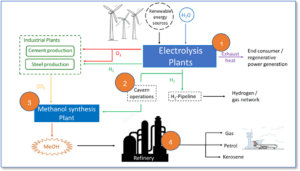 orage and use of green hydrogen is shown in the following graphics:

The electrolysis plant (1) produces green hydrogen by the electrolysis of water, which is stored in underground caverns (2). The green hydrogen is used, inter alia, for the methanol syntheses (3) to produce green methanol. Industrial emissions (e.g. from industrial plants or power stations) of highly concentrated carbon dioxid is not blown into the atmosphere, but used for the purpose of methanol syntheses. The green methanol can be further refined in refineries (4), e.g. for green Kerosin.

Typically, the clusters, where such major projects will be developed, include:

The main contractual issues for Green Hydrogen Projects include

(iii)  shareholder and cooperation agreements between the involved partners,

(iv)  turnkey (EPC) agreements for the engineering, procurement and supply of the electrolyser plants and related facilities,

(v)   agreements on the supply of green hydrogen,

The EPC agreements must involve typical EPC / turnkey risks of plant engineering, such as completeness clauses, clauses risk allocation due to new techniques (or partially even first of its kind), fit for purpose clauses, liability, warranty and multi-tier dispute resolution clauses. It seems recommendable, to base such contractual relations on well tested model agreements such as FIDIC Yellow or Silver Book, NEC or comparable model agreements. In any case, Particular Conditions must be well drafted and adapted to the project specifics.

The cooperation and / or shareholder agreements must consider the mutual roles and responsibilities. It seems recommendable to stipulate clauses to motivate the partners to work on a basis of mutual trust and in good faith on the long-term targets. The cooperation / JV should be open to new members and additional players. The likelihood of public state subsidies, the duty to work for the joint aims and the case of any shortcomings should be considered as well as the possible termination of one or more partners. Depending on the legal form of such JV, several issues must be considered.

An important legal issue is the requirement of public law permits. As of now, there are three general options to receive such a permit. The different possibilities could be relevant for duration of application proceedings, costs, responsibilities and actionability by third parties (e.g. NGO’s or affected neighbours).

The first option is that a permission can be dealt according to the Federal Immission Control Act (“Bundesimmissionsschutzgesetz”/ BImSchG). The relevant sections are § 4 BImSchG in connection with the 4th BImSchV, concerning the construction and operation of an electrolyser. One of the requirements to receive such a permit is public participation, according to § 10 BImSchG if more than 30 tons of hydrogen are to be stored at the plant. Inter alia, because of this participation of the public, the permit is likely to take up a relatively long time (12 months or even longer). Furthermore, it is not 100% clear, if electrolysers are considered to be “installations that produce substances that are in turn used to produce hydrogen”, which are included by the BImSchG, as electrolysers produce hydrogen from water directly, there are no intermediate substances.[3] Another question arises from the term used in the BImSchG: “hydrogen production on an industrial scale”. It is not clear what this must entail and whether all electrolysers are included by this, especially if such plants are rather of model character.

Another possible problem derives from the fact that installations covered by § 4 BImSchG in connection with the 4th BImSchV are automatically also included by Art. 10 of the Directive on Industrial Emissions (“Industrieemissions­richtlinie”) which is set to avoid and minimize ecological damages through industrial motions. The question that must be asked is whether this is necessary for electrolysers. Green hydrogen is especially environmentally friendly and meant to minimize ecological damages itself.

The second possibility for receiving a permit (provided BImschG is not applicable) is to apply through building planning law in connection with the state building code (“Bauplanungsrecht in Verbindung mit Bauordnungsrecht”). However, this option is only theoretical so far, there has not been much practical experience in that regard, so one cannot say, how well this works.

The third option would be to request a so-called planning approval procedure (“Planungsfeststellungsverfahren”) or a planning permission procedure (“Plan­genehmigungs­verfahren”). This is used especially for high voltage power lines and gas pipelines of public supply, but there are also voluntary planning approval procedures, according to § 43 par. 2 Nr. 7 EnWG (energy industry act). However, this process is far longer than the first option and it will be more difficult to receive a permit this way.

Another legal issue that sticks out concerns state subsidy and state aids. Generally, there is a prohibition of state aid under primary law, but there are several state subsidy options. One example for these state subsidies is the IPCEI Communication[4] (important projects of common European interest). These are projects that are based on common European interests, significantly contribute to strategic EU objectives and involve several member states of the EU. In December 2020, a manifesto was signed to work towards a cleaner hydrogen value chain and to include the hydrogen sector in the IPCEIs. So far, this has not been assessed by the Commission yet, so there is still a long way to go.

Exceptions from the general prohibition can be derived from the “De-minimis Regulation” or the General Block Exemption Regulation (“Allgemeine Gruppen­frei­stellungs­verordnung”/AGVO). The De-minimis Regulation takes effect, if the maximum of state subsidies within three tax years does not amount to more than 200.000 €, which is not likely with hydrogen projects. Therefore, this option can be ruled out immediately. The AGVO is only applicable for market activation for products that are not competitive. This does not apply to green hydrogen, as of now.

In March 2021, the German Legislator adopted a Guideline for the Promotion and Funding of International Projects on the Topic of Green Hydrogen (“Richtlinie zur Förderung und Zuwendung für internationale Projekte zum Thema grüner Wasserstoff”), which is meant to strengthen the international component of the national hydrogen strategy. The German government is furthermore requesting that the EU shall establish an international guideline to further promote the international component EU Guidelines for State Aid for Environmental Protection and Energy 2014-2020. It is planned to be updated with the European Green Deal.

An issue that is less legal and more practical involves technical compliance. First of all, there is the question of network compatibility, this concerns the feeding of hydrogen into natural gas networks. According to § 3 Nr. 10f of the energy industry act (EnWG), hydrogen is considered biological gas (“Biogas”). Hydrogen storage is codified in § 3 Nr. 10c EnWG. Therefore, both the production and the transport of hydrogen underly the EnWG. According to § 28j EnWG, operators can choose whether they want to underly the new regulations with their hydrogen networks. Hence, there are regulations for hydrogen networks, which also apply when new networks are not built, but gas networks are converted. However, the EnWG does not regulate whether gas networks can simply be used for hydrogen without being converted into pure hydrogen networks.

Since 1 January 2021, a special compensation scheme exists for the production of green hydrogen with regard to the avoidance of EEG-surcharges (Renewable Energy Act). There is a possible limitation of 15%. According to § 64a EEG, companies are included that are assigned to an industry pursuant to number 78 according to annex 4 EEG (production of industrial gases) and for which the electrochemical production of hydrogen makes the largest contribution to the total value added of the company. It is therefore required that the company has a certified energy and environmental management system. The intended use of the hydrogen is irrelevant – hence, the production of green hydrogen is no prerequisite. This limitation is only possible at the request of the company.[5]

COMINDIS is specialized in plant engineering and infrastructure projects. In case of any requests please approach our partners.

[3] There has been a decision by the committee for emission control on 4-6 July 2017 stating that electrolysers are included by the BImSchG, however, this decision does not have any binding effect in legal practice.

[5] The alternative for avoiding EEG surcharges is § 69b EEG: a limitation to zero for electricity used to produce green hydrogen. In this alternative, green hydrogen is one of the main requirements, the company must be able to prove an actual supply relationship to the renewable energy source; the further prerequisites are defined in § 93 EEG. The regulation does not yet define any location criteria for electrolysers or any further requirements for system efficiency; a new regulation is set to take the place of the current one as soon as some pilot projects have been analysed. 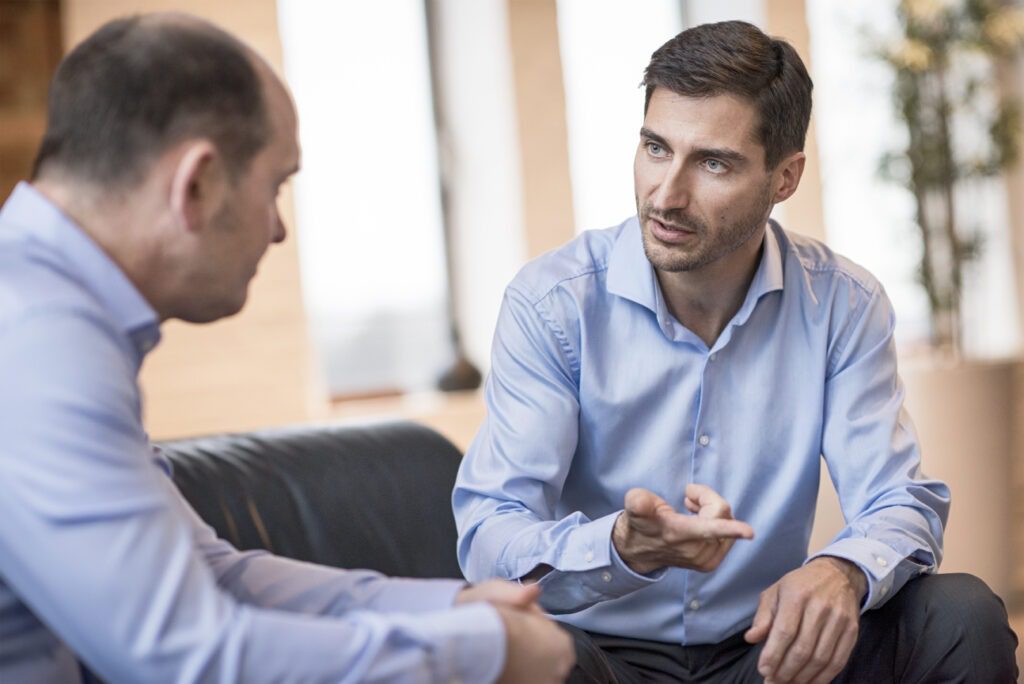